Hi, dear reader! This is an old post from a travel/adventure blog I used to keep. This is my first post from my old job as a Waterfront Intern at the School for Field Studies Center for Marine Resource Studies in the Turks and Caicos Islands, talking about our prep work on our boats before the students arrived. Cue flashback to a previous life!

We were in the sun for 10 hours today because we’re getting ready to put the boats in the water. James, the dive safety officer and our direct supervisor, gave us a rough schedule of what to expect over the next two weeks before the students arrive, but warned us that it was subject to change. He expected it could take us anywhere from one morning to three days to get all five boats (21, 23, and 24ft Carolina Skiffs, one small Zodiac RHIB, and a 26 (?) ft Boston Whaler) in the water. Then, we’ll have to learn how to drive and, more importantly, dock each of them. The incentive is: the earlier we get the boats in the water and figure out how to handle them, the earlier we can start diving! But, I’m getting ahead of myself. Today we did maintenance. 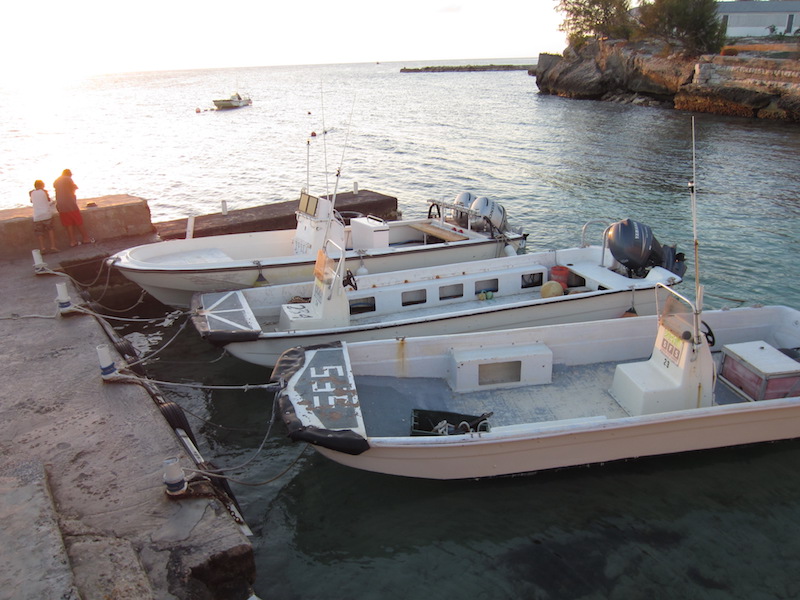 Four of our little fleet at our doc, from left to right: the Whaler, the 24' skiff, and the 23'. You can also spot the 21' out at the mooring. This photo was taken much later in the year, after much TLC! It was a constant battle against the elements and general decay!

We started with replacing the propeller on the 21ft skiff and the process was indicative of how the whole day would be. The nut that holds the prop on was so corroded (because of the salt air) that it was nearly impossible to get off and was completely stripped by the time James finally removed it. So, we needed a new nut and Erin (another intern) and I went down to one of the shops to ask for Nonni (sp?) who might have the piece. Well, Nonni didn’t have it, but suggested that we check with his brother, Chubby, who was supposedly down by the docks. We couldn’t find Chubby and had to return empty-handed. When we finally located Chubby and a new nut, it turned out that the one he had was too big and so on….

We then started working on replacing zinc anodes on the foot of the outboards, draining some over-filled oil, replacing fuel filters, and hooking up the batteries. None of these tasks went quite smoothly, as materials are limited and tools are rusty. Plus, none of us had ever done these tasks, at least on boats, and the attitude was “make it work,” much like our own sweaty, grimy, sunburned version of Project Runway.

Eventually, we got the skiffs and the zodiac all set (except for the 23, which needs some fiberglass patching tomorrow). We then started on the whaler, which is more complicated, mostly because it is larger and has two outboards. The main task I and two of the other interns had was to add an automatic tilt system, which I still don’t quite understand, but looks like two metal plates which swing out from the boat and are connected to it by a rubber tube which compresses as the plates are pushed up by the water. Whatever they do, James dropped of the box with all the parts, handed us the instructions, and said: “get this figured out, but don’t drill any holes in the boat before I’m back.” We figured out how to put together the plates and were marking where to drill when James returned. Evidently he was pleased at our progress because he told us we could start drilling (into the hull!) and left again.

Fortunately, with the genius of Amanda and AJ, we got the plates set up and the whaler is ready for its launch tomorrow. Despite being in the Caribbean sun for 10 hours, hauling batteries and oxygen kits, dealing with a dazzling array of either rusted over or intimidating perfect tools (which we promptly covered in grease), I had a fantastic time. We interns seem to work well together and with James; everyone is laid back and eager to contribute. As Erin suggested, I thought of what I’d rather be doing and really, I couldn’t think of much. Our lives are going to be staked on the performance of these boats, and it’s essential for us to understand them and, hopefully, to learn how to fix them. I’m going to have an amazing array of skills that I wasn’t expecting to gain, including driving a 12 passenger van, which I learned how to do yesterday. Of course, both vans now won’t start, but I don’t think their engines are within our job description.

Our day today ended with a swim from the dock, a freshwater shower (the luxury!), and jerk chicken in town, since it’s Friday. The real work starts tomorrow. Hopefully, we’ll have all the boats in the water and then can start learning how to handle them on Sunday and maybe even be able to dive within the next couple of days! Keep your fingers crossed!

Well, thank you for reading this incredibly long post; I doubt I’ll be as loquacious in the future :)