Hi, dear reader! This is an old post from a travel/adventure blog I used to keep. This is my third post from my old job as a Waterfront Intern at the School for Field Studies Center for Marine Resource Studies in the Turks and Caicos Islands, a walk-through of some of the juvenile lemon shark research conducted there and general life. Sharks!

I’m pretty sure they’re drawn to lost crumbs somewhere beneath my keyboard. They keep crawling out and it feels a bit like a video game as I try to crush them before they can bite me. They’re tiny but aggravating.

Anyway, I know that’s not what you want to read about. I can tell, through cyberspace, that your interest level is dropping….

So, the students are here. Yay! Scary! So much responsibility! On the evening before they arrived, however, we interns had an adventure. One of the professors here, Dr. Aaron Henderson, is researching the juvenile lemon shark population and distribution around South Caicos. This entails going out (at night because that’s when we have free time), setting up a 110 meter net, and waiting until we hear a splash. Then we go out and find whatever is caught in the net. Sometimes it’s a bonefish, but, when we went, twice it was a shark! Of course, the next step is to detangle the shark from the net. Then, the process gets a little wacky. We now have a (small) shark in 2 feet of water, 100 yards from the boat. So, we have to “walk” the shark back to the boat. This means holding it by its head (so it can’t wrap around and bite you) and walking slowly over bumpy terrain. It reminds me of walking with a baby taking its first steps: a wide stance, slow pace, fearing that someone is going to get hurt.

When the shark was back at the boat, we pulled it out of the water and laid it down on a board with a meter stick to get a length measurement. At this point, Kat and I were in the boat and the shark decided to make a…flail for it, by which I mean it jumped out of Aaron’s hands and began flopping around inside the boat. Aaron said “watch out it doesn’t get you!” and Kat and I RAN to opposite sides of the boat. She ended up standing on the raised portion of the stern and I climbed halfway up the bow. Aaron then suggested, calmly, that one of us try to grab the shark by the tail. Neither of us felt quite up to the task, even if the shark was only about 3 feet long, so he jumped in the boat and got it secured. 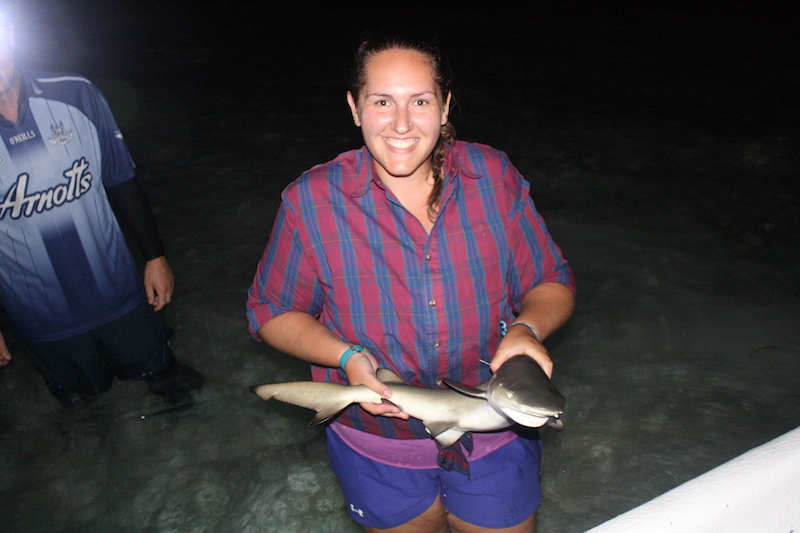 To be honest, I couldn't wait to put this guy/gal back in the water, but I was promised that I would want a photo for later. It looks pretty calm, but I've seen the scars from the bites these little ones can give!

The rest of the trip was less eventful, other than the glamorous job of retrieving the net and shaking it to clean it of muck and vegetation from the bottom. This meant throwing seagrass and mangrove jellyfish (Cassiopea sp.) into the air and hopefully not onto our heads. “Sharking,” as we call it, is an experience, for sure. There are long periods of waiting and quiet conversation, then huge surges of adrenaline, all under an astounding starry sky.

The next day was even more terrifying, as the students arrived. They seem pretty great, on the whole, though 3 days is hardly enough time to get to know all of them. I do, however, have the names down! Our job has been mainly to get the students through swim, snorkel, and dive checks. We did our first snorkel in open water today, which was lovely, and are planning on doing our first open water dives on Saturday. But, that’s contingent on the weather. There’s a tropical depression called Gabrielle headed our way and we may need to take the boats out of the water. Getting the boat trailers ready, just in case, was today’s task and it involved a lot of corroded bolts, empty batteries, and greasy hands. The work is rewarding, especially as we’re making the trailers look worlds better; we’re contemplating pitching a TV show called “Pimp my Boat Trailer.” It’s a lot of time in the sun, though, and I’m exhausted. I’m going to try to get a good night’s sleep because tomorrow we take the students into the field in the morning, and then will be working on the trailers and boats all afternoon.