Hi, dear reader! This is an old post from a travel/adventure blog I used to keep. This is my fourth post from my old job as a Waterfront Intern at the School for Field Studies Center for Marine Resource Studies in the Turks and Caicos Islands, in which I followed up a click-bait title with tales of baby lobsters and baby turtles. And some boat problems. I am happy to be alive, but come on past-Sophie, hyperbole much?

Well it’s been a long week and that’s not really a bad thing! On Saturday we celebrated our “monthiversary” of our internship and we’re finally settling into a groove. We’re figuring out the schedule and our various duties, but it also means we’ve become a little more relaxed. That relaxation led to the first of several…escapades. We took a trip to visit the “lobster condos” early this week, which are stacked up cinderblocks providing extra cover for juvenile Caribbean spiny lobster. In order to determine their effectiveness, we caught and measured the lobsters living inside. They’re difficult to catch, since they’re fast, but they only move backwards and they make a high-pitched sound when you have a hold on them, so the process is hilarious. We probably would have caught more lobsters if we’d laughed less, but what’s the fun in that? 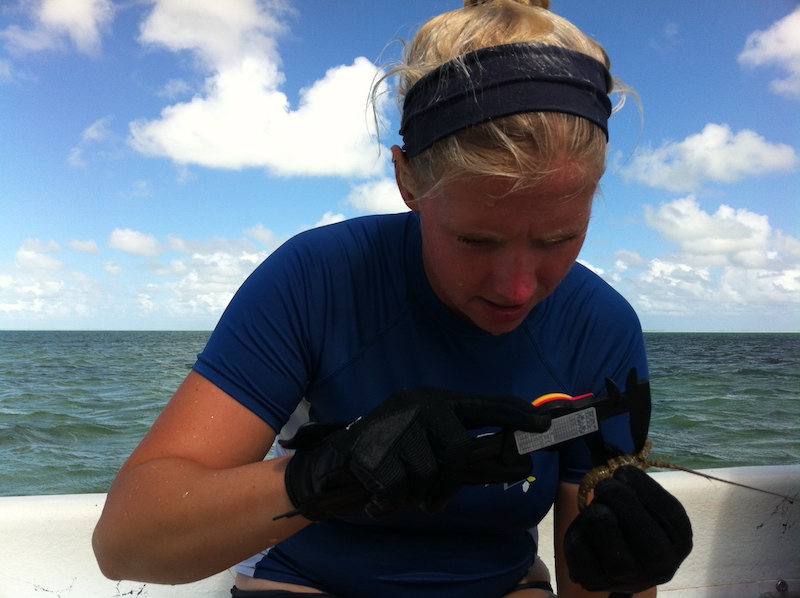 Kat focuses on the delicate task of measuring a juvenile spiny lobster. Cuuuuuuuuuute!

Anyway, we got back on the boat, pulled up the anchor, and left to head back to the dock, forgetting that the ladder was still down. Long story short, we didn’t harm the outboard when the rope that holds the ladder up got wrapped around the prop, but we did break 2 of the welds holding the ladder onto the boat. It was the first major screw-up of the semester. But, it meant that we got to do some improvements to the back of the boat and we’re getting another boat into shape while the ladder is off getting fixed, so all’s well that ends well? Right?

My adventures didn’t end there. Nope, not even close. On Friday, the real fun began. The majority of the Center (meaning all of the students and a handful of staff) planned to camp out on one of the beaches, but Fridays are also sharking nights, which can run until 11PM or later, so I volunteered to shark, rather than camp. We’d had a rainy, cloudy day, but the evening seemed a little clearer, at least during dinner. Right before we got on the boat, however, it started to rain. We braved it anyway and headed out. A few minutes away from the dock, an eagle ray breached two feet from the side of the boat, right over the heads of two of the students. I’ve seen rays jump before, but never this close and only really saw the splash. It seemed like a good omen.

Night fell as we reached the shallows, meaning we had to use a flashlight to find the little white buoys that mark the channel. A trip that would take 15 minutes during the day took close to an hour. When we finally arrived, we started setting up the net and about halfway through, heard splashing near the shore that meant there was a shark in the net. For the next hour and a half, we were constantly catching sharks for a total of 7, two shy of the overall record for one night and during only half a session!

Perhaps because we were so busy with the sharks, we didn’t see the thunderstorms rolling in until we saw lighting not far enough away on the horizon. Aaron, who is researching the sharks, decided to start pulling in the net. A moment later, another lightning bolt, followed almost instantaneously by thunder and driving rain. We quickly piled the net into the boat, jumped in, and started to head for the dock. Except, we were in the shallows and the channel is difficult to find even without pouring rain. We didn’t fancy a slow trip into the open water with a thunderstorm right on top of us; Aaron decided to stick to the shallows where we would be slower, but might not be the tallest thing around. So, we inched by the mangroves, cowering with our heads down as lightning blinded us.

With the storm moving closer, Aaron decided to pull into a cove with a boat ramp closer to the site. We called the Center, asked to be picked up, dropped the anchor, and jumped off the boat. I huddled with the students (teaching them how to sit correctly in case of a ground strike) and Aaron emptied the boat. We waited until our ride arrived, then made it back to the Center just as the campers returned. All in all, I think I had the better night, because though I was terrified, I also saw some sharks and got a much better story than some wet tents and sandy feet!

Saturday was hectic, but not calamitous (thank goodness!), but we had more excitement on Sunday. I made brunch in the morning with an awesome kitchen crew and the lovely Amanda. It turned out pretty well, with a blueberry and peach crumble that everyone loved and egg scrambles that would have been frittatas if both ovens worked….Then we went diving in the afternoon and were settling into some pre-dinner down time when Kat gets a phone call. Watching her face, I knew it was something exciting. I guessed puppies. Instead, while out for a walk on the beach, Alex, another professor, and his wife Juliana had stumbled across baby hawksbill turtles in the surf. Since sea turtles usually hatch during the night or early morning and the water was likely too warm for them, we were worried about these babies. We grabbed a bucket of cold water and headed over.

I’m not sure I’ve seen anything close to as cute as these perfect little creatures, miniature versions of their adult selves, clumsily trying to climb our hands or mimicking leaves in the water by tucking in their fins. Occasionally, they’d stick their heads out of the water and breathe, blowing tiny bubbles each time. Unbearable, guys, unbearable. We’re hoping that these little turtles will make it, though the time of day and their seeming lack of motivation to get further out in the ocean is suspect. Overall, though, it’s incredibly exciting that they’re nesting on South and a great reminder of what we’re here to protect. 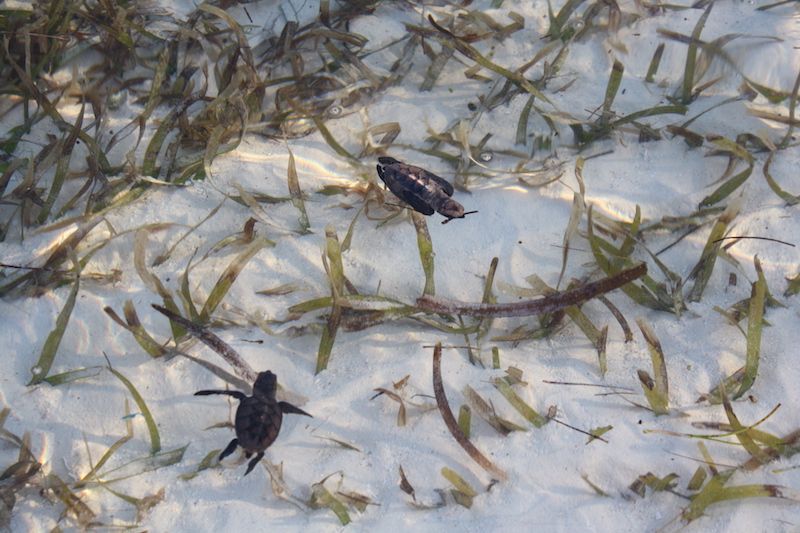 A couple little babies in the seagrass.