Hi, dear reader! This is an old post from a travel/adventure blog I used to keep. This is my fifth post from my old job as a Waterfront Intern at the School for Field Studies Center for Marine Resource Studies in the Turks and Caicos Islands. I explain one of the major research projects I was envolved in. Oh, and tell an embarrassing story (from whence the title comes).

Since I last posted, we’ve been on a field trip which involved two nights camping on one of the bigger but less inhabited islands at a campsite absolutely covered in ants, a trip to the most beautiful beach in the world (Mudjin Harbour), and countless interviews with locals and tourists to determine their seafood consumption. Well, and a couple of brutal hangovers, as we took the time off South to take in some…civilization. And by civilization, I mean frozen margaritas. It was a nice change, but I was happy to get back to the rock. 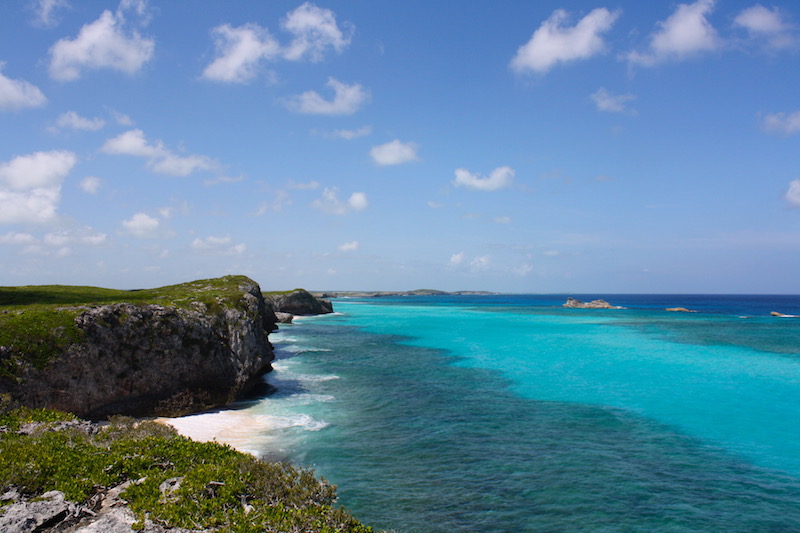 Just one of the incredible views at Mudjin Harbour. Totally totally worth a visit if you're ever in the area.

Back on South, life is insane as we’ve started directed research for the students. Each is put on a project led by one of the faculty. When I was a student, I caught and dissected lionfish. I’m working with the lionfish project this time as well, but we’re only surveying after one too many incidents with curious sharks. It’s a huge change from being a student. I’m in charge of all of our dives, keeping the students safe and the data reliable. We’re working with a new methodology for lionfish, figuring out the “detection probability” under varying conditions. Essentially, each student is trying to find as many lionfish as she can while swimming in a straight line. When she sees one, she stops, measures it and how far away it is from where she was. We can get an idea of how easy it is to spot them, which is useful information for conservation, clarifying the best times of day and depths to see and catch/kill lionfish, as well as providing a picture of their population densities and size distributions. It’s fascinating to learn a new survey method, though frustrating as the overseer, since I cannot point out any lionfish I see. Though, as much as I try, I still can’t control my face. One of the students mentioned that he could tell whenever I saw a lionfish, since I would stop, turn around, and stare at them, eyes wide, imploring. I just want my research babies to do well!

The Directed Research module comes with other responsibilities as well. One of our usual Carolina skiffs is out of commission, so we’ve pulled in what we call the Boston Whaler. It’s actually a Brunswick Guardian, a favorite of the military and paramilitary, drug enforcement and drug runners alike. Ours isn’t in great shape and given the boat’s pedigree, I don’t really want to know why. We’ve been overhauling the whole thing, ripping up the floor to run all the wiring above the deck so we can access it, hooking up a new bilge pump to deal with the years of rainwater and splashwater that has collected in the bow, replacing the shifter cables, installing a new ladder….it’s been a struggle, but worth it! We’re now in the process of learning how to drive the thing, which is very different from the light, slow skiffs. I almost have the hang of it now, but I don’t have the chutzpah to drive it as fast as James does.

Kat, another intern, is learning too and, well, I don’t want to blame her for what happened, but I got a lesson in just how different using the Whaler can be. We were pulling up to one of the moorings and I had the boat hook out to pick it up, but I got the hook wrapped around the bowline and was running to the other side of the bow, just as Kat turned and….. I dropped the boat hook and just sort of sailed off the side. I had time to squeak, “oh no!” before I was in the water. Those on the boat barely asked if I was ok before starting to laugh. James offered to pass down my scuba gear so I could stay in the water (and hide my shame) but I valiantly climbed back on board. For a better idea of what happened, I’d check out this video. Funnily enough, I got made fun of for the “oh no!” rather than the fall. Thanks, mom, for curtailing my potty mouth. No idea it’d get me made fun of, huh?